You are here: Home / Kearny 150 News / A souvenir for the Sesquicentennial

Maybe it will be a collector’s item one day featured on Antiques Road Show.

For now, though, it’s a commemorative ornament “designed by the Kearny Sesquicentennial Commemorative Committee to reflect and celebrate the remarkable history of the Town of Kearny …”

And it can be yours – as the TV commercials are wont to say – for a mere Jacksonian bill, or, as we say in the vernacular, $20.

Look for a kiosk advertising sales of the item at the Kearny Urban Enterprise Zone (KUEZ) tent in Town Hall Park.

Customers using credit or debit cards will be charged a $1 processing fee per ornament. Or you can buy it year-round at Town Hall in the first-floor Town Clerk’s office or contact Lyla DeCastro Lawdanski at 201-955-7979.

Proceeds from those purchases will go to offset expenses associated with next year’s observance of the town’s 150th birthday.

According to a description provided by the anniversary committee, the ornament “is made of solid brass with a 24k gold finish” whose dimensions are “approximately four inches wide and three inches tall.

“Its three-dimensional design showcases the Kearny Town Hall, a federal-style building constructed of Indiana limestone in 1909.”

It was designed and manufactured in Lincoln, Rhode Island, by ChemArt, a veteran-owned small business specializing in creating 3D etched brass keepsakes founded in 1976, the committee said.

Among the firm’s clients listed in the company’s website are the White House Historical Association, State of Texas Capital Restoration, National Trust for Historic Preservation, the Danbury Mint and the Clinton Library.

DeCastro Lawdanski said the committee came up with Town Hall as the image to be represented on the ornament after a discussion of various options. “We went back and forth on it but we decided to go with Town Hall as the seat of local government and its location in the center of town,” she said.

The same image is captured on the reverse side of the ornament.

Each piece is packaged in a small cardboard, felt cushioned box with a commemorative card.

The committee ordered an initial batch of 500 ornaments for sale and, depending on how quickly these are gobbled up, a second batch of 500 may be requested, said KUEZ Coordinator John Peneda, a member of the anniversary committee.

Peneda credited KUEZ intern Gabriele Salvador with contributing to research on the project.

“It has been a pleasure to be part of the Sesquicentennial Committee and help shape this momentous anniversary,” said DeCastro Lawdansky. Members of the committee – community leaders, residents, employees and teachers – have been meeting monthly to plan next year’s events.

Although the official unveiling isn’t happening until this week, word has gotten out to the extent that, according to DeCastro Lawdansky, she has already taken orders for 58 ornaments from residents and from people who’ve had past associations with Kearny.

“People may also want to purchase the ornaments as gifts for their children or grandchildren,” Peneda suggested.

Four members of the Kearny corporate community sponsored production of the ornament, the committee said.

For more information about the ornament, anniversary events and/or the Town of Kearny’s history, visit www.kearny150.org or the Kearny 150 Sesquicentennial Facebook page. 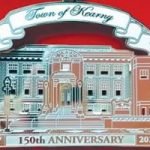