The banners feature the official Town Seal in gold and are designed to showcase Kearny colors, red with a black border along the sides. They will be prominently draped on the façade of Kearny Town Hall, in time for the kick-off celebration of the Town’s sesquicentennial anniversary. This is the first time the Town will display banners on the façade of the Kearny Town Hall. The cost of the banners is funded by a donation from River Terminal Development.

The banner unveil ceremony will be held on Tuesday, April 25, 2017 at 6:00 p.m. It will provide an opportunity to call attention to the historic, milestone sesquicentennial anniversary and the series of commemorative events planned to mark the anniversary.

The banners will remain in place throughout the year in commemoration of the anniversary. For more details on anniversary events and updated schedules, visit www.Kearny150.org, call (201) 955-7979 or “Like” Kearny150 on Facebook. 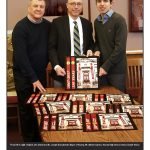