The theme for the yearlong celebration will be “150 Years of Community,” according to Mayor Al Santos, the de facto chair of the 21-member committee, which has met twice so far.

“That’s what it means to be a community,” Santos said of the committee’s theme choice. “It’s about having residents of the town who are dedicated to the well-being of their fellow residents.”

Current plans call for the celebration to begin a little early with a photography contest featuring photos of Kearny landmarks this fall. The committee will also probably host a fundraiser in the fall to help pay for anniversary events.

Next year, a major kickoff event, along with a series of lectures on the founding of the town, Civil War Gen. Philip Kearny, and the impact of industrialization in South Kearny, as well as other topics, are on the agenda.

Gen. Kearny built a castle on Belgrove Drive overlooking the Passaic River shortly before his death at the Battle of Chantilly in 1862. At the time, the land comprising Kearny was part of Harrison, but became its own township through an act of the New Jersey state Legislature in 1867.

The castle was demolished in the early 20th century to make way for homes in the town’s First Ward.

Santos said the committee has been subdivided to research topics such as Gen. Kearny, veterans and schools, as well as to work on public relations and community outreach. Lynn Oelz, who owns a local business, Signs By Lynn, is developing 150th anniversary logos and banners, according to Santos. 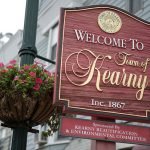