You are here: Home / News / Kearny Responds To DEP Release Dated July 25, 2019 Regarding Hydrogen Sulfide Emissions From The Keegan Landfill

The Town of Kearny continues to demand the elimination of hydrogen sulfide (H2S) emissions from the Keegan Landfill, which is owned and operated by the New Jersey Sports and Exposition Authority (NJSEA), an agency of the State of New Jersey.  Elimination of H2S entails the installation of a gas collection system and an impermeable synthetic cover over the landfill’s surface, as was done at Fennimore Landfill in Roxbury, New Jersey, and as is currently being implemented by the DEP at the MSLA 1-D Landfill in Kearny, New Jersey.  The NJSEA and DEP have agreed to the installation of a gas collection system but have not agreed to a permanent closure with an impermeable cap.  The NJSEA’s and DEP’s incomplete remedy would subject Kearny residents to continued H2S exposure.  The Town of Kearny strongly objects to the incomplete remedy.

In connection with the installation of the gas collection system, the DEP issued a press release on July 25, 2019 with several incomplete or misleading statements.  Those statements are copied below in italics, followed by the Town of Kearny’s response.

To protect public health, the state uses a conservative hydrogen sulfide regulatory threshold of 30 parts per billion averaged over a 30-minute period as measured at or beyond a landfill property line.

This is not a conservative standard.  It is a human-protective minimum. 30 ppb of H2S is the threshold for health symptoms, such as headaches and nausea, resulting from brief exposure periods.  In addition, epidemiological data show that levels above 30 ppb may be associated with increased hospital visits for respiratory symptoms, especially for children.

Keegan Landfill is situated off Bergen Avenue, north of Interstate 280.

The landfill’s western perimeter, from which most of the hydrogen sulfide exceedances have been recorded, is within 1,000 feet of residential buildings and apartments, a municipal outdoor recreational complex (Harvey Field) that includes several soccer fields, and numerous commercial uses.

The NJSEA suspects that construction and demolition debris containing gypsum wallboard combined with excessive rainfall is generating production of hydrogen sulfide gas at the Keegan Landfill. The landfill has stopped accepting these materials.

The State has operated the Keegan Landfill through its agency NJSEA since 2010, when the landfill was re-opened for construction and demolition waste.  Adequate controls on the contents of truckloads dumped at Keegan were not implemented.  As a result, the amount of gypsum wallboard (sheet rock) disposed at Keegan Landfill since it was re-opened in 2010 is not known.  Notwithstanding the lack of adequate inspections and controls, the DEP has annually renewed the NJSEA’s permit to operate the landfill.

The decomposition of gypsum wallboard (sheet rock) into rotten-egg smelling hydrogen sulfide can take anywhere from 1 to 10 years, depending on the settling and compaction of materials in the landfill, and on moisture levels.  On average, most of the hydrogen sulfide creation arises three to five years after the gypsum material is disposed on site. The only reason the landfill is no longer taking gypsum wallboard is because of a court injunction closing the landfill to all waste pending a court hearing on a permanent closure.  Prior to the issuance of the injunction, gypsum wallboard materials were observed entering the landfill on April 27, 2019 when some of the material spilled out of an over-loaded truck.  A videotape of the incident was made and the NJSEA’s head of solid waste was on site when it occurred.  However, no violation was issued to the hauler or to the NJSEA.

The DEP started receiving from the public complaints about odors in December and worked quickly to identify the landfill as the source.

Kearny Mayor Alberto Santos first complained to the Hudson Regional Health Commission, the DEP’s agency for odor complaints in Hudson County, about noxious rotten egg odors emanating from the Keegan Landfill on May 25, 2018, seven months earlier than acknowledged by DEP.  Complaints increased in number in December 2018 and January 2019.  At the time, the NJSEA denied the Keegan Landfill as the source of the odors.  Because of the State’s inaction, the Town acquired its own air monitoring stations in March 2019, located them on municipal property as close to the landfill as possible, and publicly disclosed repeated readings of hydrogen sulfide in excess of 30 ppb.  In April 2019, the DEP entered into an Administrative Consent Order with the NJSEA requiring the NJSEA to install air monitoring stations on the landfill perimeter; the NJSEA’s monitoring stations were installed in May 2019.

… the levels of hydrogen sulfide recorded to date are not known to cause adverse health effects. However, exceedances of the 30-minute, 30 ppb regulatory standard were detected on multiple occasions between 30.3 ppb and 828 ppb. DEP is taking enforcement action with respect to these exceedances.

The NJSEA’s analysis of hydrogen sulfide readings is unreliable.  Some very high recorded readings are not included in the reported averages because NJSEA has attributed some of them to meter error even though all air monitoring stations are monitored daily and certified as to reliability by Emilcott Associates, a leading provider of this type of air monitoring in New Jersey.

DEP has not issued any violations against NJSEA since June 5, 2019, even though there have been numerous exceedances of hydrogen sulfide since that date.  By way of example, the Town’s air monitoring stations registered 61 ppb of H2S on Tuesday, July 23; 39 ppb on Wednesday, July 24; and 69 ppb on Thursday, July 25, 2019.  On each of those dates, the Town closed the Harvey Field recreational complex, cancelling scheduled games and practices.  The exceedances and field closures were communicated by Mayor Santos to the DEP Commissioner and Assistant Commissioner, and to the Governor’s Chief of Staff.  None of the recipients responded to Mayor Santos. 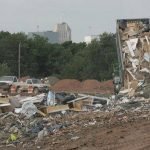