The Town of Kearny gathered at 11 a.m. on November 11, 2021 to honor the nation’s veterans during the Veteran’s Day remembrance ceremony held by the American Legion Post 99.  The ceremony took place at Veteran’s Memorial Park where Mayor Alberto G. Santos, UVO Liaison Council President Carol Jean Doyle and Council Members Marytrine De Castro, Albino Cardoso, Peter Santana, Richard Konopka, Susan McCurrie, and Gerald Ficeto joined Kearny residents and many Veterans and their family members to acknowledge the sacrifice made by all Veterans, living and deceased, and to honor those who gave their lives fighting for freedom.

Mayor Santos thanked Kearny’s veterans and the veterans’ organizations (American Legion Post 99, VFW Post 1302, West Hudson Marine Corps League Detachment 209, and the UVO) in commemorating Veteran’s Day.  He also extended the community’s gratitude to those who served our country and those who are currently serving our country in the United States military.

During his remarks, Mayor Santos recalled that Kearny lost 61 men in World War I, a war that claimed more than 116,500 American lives.  “We are indebted to all the courageous American men and women who have answered the call to defend our way of life and our freedoms,” he noted.

The Town of Kearny thanks all veterans for their service. 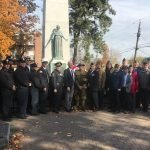 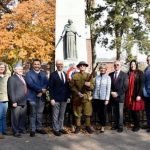 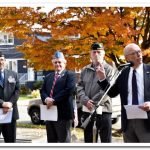 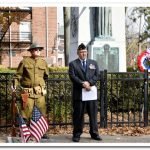 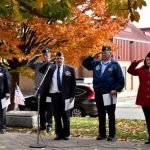