Categorized by type of offense, there were drops in aggravated and simple assaults, burglaries, larcenies and arson in 2016. For the third consecutive year, there were no homicides. There were two reported rapes and increases in robberies and motor vehicle thefts. The data also show that a total of 1,464 arrests were made in 2016, a significant increase from the prior year’s 1,057 arrests. A majority of the persons arrested were not residents of Kearny but instead from neighboring municipalities in Essex and Hudson Counties.

“These numbers show that the Kearny Police Department continues to be very effective in responding to calls quickly and making arrests when necessary, both of which are essential to maintaining public safety,” noted Mayor Alberto G. Santos.

The total number of uniformed personnel in the Kearny Police Department is 101. With a total population of 40,684 as of the 2010 census, there is 1 officer for every 403 residents in Kearny. The police department is led by John Dowie, who has served as Police Chief since 1997.

A copy of the Kearny Uniform Crime Report Index for 2016 is attached. 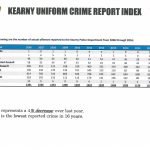 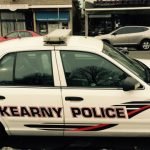