The Town of Kearny’s Uniform Crime Reporting Index for 2020 shows 518 reported crimes in 2020, a significant drop of 27.5% from the previous year’s number of 715.  The decrease continues a downward trend in reported crimes in recent years.  Of note, the 2020 number is less than half of what was reported a decade ago.

There were drops in almost all major categories of offenses, including a 29% decrease in assaults, 19% decrease in burglaries, 30% decrease in larcenies, and a 20% decrease in motor vehicle thefts.  For the third year in a row, there were zero homicides.  There were two reported rapes in 2020, an increase from zero in 2019 and one in 2018.

“These numbers show that Kearny is a very safe community.  While the pandemic likely had an impact in reducing crimes related to certain property categories, the overall drop in violent crime is a remarkable achievement.  It shows that the Kearny Police Department continues to be very effective in responding to calls quickly and making arrests when necessary, both of which are essential to maintaining public safety,” remarked Mayor Alberto G. Santos.  He also noted that the Department has effectively incorporated technology and cameras in monitoring key locations.

Under Police Chief George King, the Kearny Police Department maintains full staffing by hiring new officers annually.  The current total number of uniformed personnel is 105.  With a total population of 42,339 in the most recent census estimate, there is 1 officer for every 403 residents in Kearny. 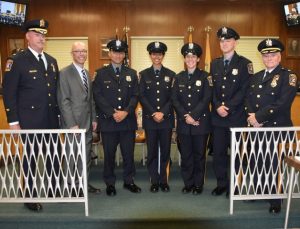 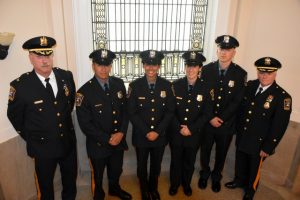