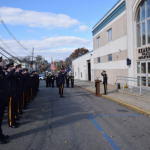 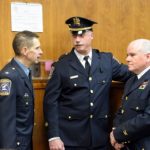 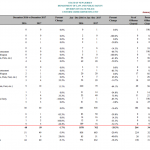 Reported Crimes in Kearny Drop by 29% in 2017
The Town of Kearny’s Uniform Crime Report Index for 2017 shows 762 reported crimes in 2017, a significant drop of 29% from the previous year’s number of 1,078. The decrease continues a downward trend in reported crimes in recent years. Of note, the 2017 number is less than half of what was reported a decade ago in 2007. The report also shows that the Kearny Police Department responded to over 30,000 incidents during the course of 2017.

“These numbers show that Kearny is a safe community. The Kearny Police Department continues to be very effective in responding to calls quickly and making arrests when necessary, both of which are essential to maintaining public safety,” remarked Mayor Alberto G. Santos. He also noted that the Department has effectively incorporated technology and cameras in monitoring key locations.

Under Police Chief John Dowie, who retired in November 2017, and newly appointed Chief George King, the Department hired 10 new officers in 2017. That brought the total number of uniformed personnel in the Kearny Police Department to 107. With a total population of 40,684 as of the 2010 census, there is 1 officer for every 380 residents in Kearny.