On June 12, 2019, the New Jersey Supreme Court ordered the New Jersey Sports and Exposition Authority (NJSEA) to close the Keegan Landfill, effective immediately. The order, issued by the full Supreme Court, reinstates the relief that had been granted by the Hudson County Superior Court on May 24, 2019, which had mandated closure pending a full hearing on a lawsuit brought by the Town of Kearny. After an emergency appeal was filed by the NJSEA, the Appellate Division reversed the Superior Court’s closure order. The Town of Kearny, in turn, filed an emergency appeal with the Supreme Court which agreed with the Town and reversed the Appellate Division’s decision. The landfill will now remain closed pending a full hearing in the Superior Court on the claims brought by the Town against the NJSEA. The claims, which assert harm to the environment and public health, are based on the Environmental Rights Act and the Legacy Landfill Act.

Mayor Alberto G. Santos expressed his satisfaction with the court decision, “The Town Council and I are elated for the residents of Kearny that the Supreme Court reinstated the closure and reversed the Appellate Division. The NJSEA sought to cover up that they are the responsible party for harmful hydrogen sulfide emissions from the landfill – they presented false information about the causation of noxious air emissions from dumping and about the amount of emissions being created. The NJ Supreme Court got the facts and science right.”

For over a year, residents have been complaining of noxious odors from the 100-acre landfill. Residents have flooded DEP with calls complaining about odors and have protested at the landfill entrance. In addition, a petition demanding closure has been signed by over 7,000 residents. According to Mayor Santos, “Our community is demanding the elimination of harmful air emissions. Because the State is the owner and operator of the landfill, they must close it and properly clean up the site by installing a gas collection system and an impermeable cap over the entire surface.”

The Keegan Landfill is used by the NJSEA to dispose of construction and demolition waste. Waste companies pay the NJSEA to dump at the site and those fees generate over $25 million a year for the State agency. The odors are generated from the decomposition of the dumped materials. When rainwater mixes with components such as gypsum sheetrock, naturally occurring bacteria convert the sulfate extracted from the gypsum into hydrogen sulfide, also referred to as H2S, which is noted for its rotten-egg odor. According to the Department of Health, at levels of 30 parts per billion (ppb), H2S can pose chronic health impacts, such as nausea, irritation of the eyes, nose and throat, and, for individuals with respiratory problems, difficulty in breathing. After initial denials by the NJSEA that the odors were coming from the landfill, the Town of Kearny installed air monitoring stations in early March 2019 and placed them on municipal property approximately 500 feet from the landfill’s western perimeter. In just 2 months, the Town registered over 30 separate instances of H2S in excess of 30 ppb. Kearny Mayor Alberto G. Santos and the Town Council publicly disseminated that information in order to get the State to take action. That information led the Department of Environmental Protection to require the NJSEA to install air monitoring stations on the landfill itself and make those reads publicly available. The NJSEA’s reads in the months of May and June have frequently exceeded the 30 ppb threshold, confirming the Town’s data.

The Keegan Landfill originally began operating in the 1950s but by the mid-1970s had become inactive. It was re-opened by the State of New Jersey’s Meadowlands Commission in 2009 for the purpose of capping and closing the landfill with construction and demolition debris. The State promised that by 2016 the capped landfill would be turned back to the Town of Kearny for the construction of a golf course and recreational fields. In 2016, the NJSEA (which assumed the functions of the Meadowlands Commission in 2013) refused to turn back the landfill to the Town and used the power of eminent domain to take legal title and continue landfilling operations. Based on tonnage and tipping fee records, the landfill generates $25 million a year in revenue for the NJSEA, meaning that, since it was re-opened in 2009, over $250 million has been collected by the NJSEA and Meadowlands Commission.

According to Mayor Santos, “There is no amount of money that compensates for harm to our health or our environment. We want this closed and offending parties held accountable, even if they are an agency of the State of New Jersey.” 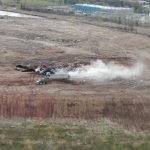 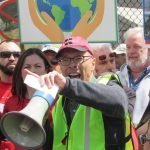 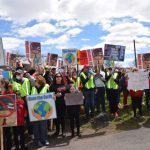 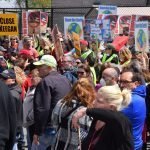