You are here: Home / News / Statement of Mayor Alberto G. Santos Demanding that the Keegan Landfill be Capped (from NJSEA Meeting of October 17, 2019)

This morning’s presentation by Ms. Wilkerson [SCS Engineering] provides more examples of what I call distorting, disguising, deliberately obscuring, or even reversing the meaning of words.  You, the New Jersey Sports & Exposition Authority (NJSEA), have created your own dystopia here, where if you repeat inaccuracies often enough, you think others will then believe that 2 +2 = 5.  In Orwell’s Nineteen Eighty-Four, the Ministry of Plenty did rationing.  In 2019 New Jersey, the State Department of Environmental Protection is the Ministry of Pollution, enabling hydrogen sulfide and methane emissions, and liquid sludge dumping, by a State agency.  In Orwell’s Nineteen Eighty-Four, the Ministry of Truth engaged in propaganda.  In 2019 New Jersey, the NJ Sports & Exposition Authority is the Garbage Enterprise Authority.

Here are examples of Orwellian newspeak by the NJSEA:

NJSEA’s attorney’s letter (James Stewart of Lowenstein Sandler) dated September 13 to the Superior Court, “the system is working as anticipated. We have already seen a clear reduction in H2S emissions….”

Fact:  Since September 5, the date the gas collection system began operating, there have been 17 exceedances of 30 ppb, including last night.  That’s 40% of the days the system has operated.  Just three days after that press release and attorney letter, the Town had to evacuate Harvey Recreational Field during the peak use hour, when there were over 160 children playing, plus coaches and family members in attendance.

Fact:  The NJSEA provides no authority for this statement.  The best outcome is the elimination of H2S emissions.  The DEP Fact Sheet dated March 18, 2014 for Fenimore Landfill indicates this is feasible:  “DEP’s long term plan [for Fenimore landfill] is designed to substantially reduce moisture in the landfill, and thereby “turn off” the sulfur creating bacteria. This will virtually eliminate production of additional H2S, while the gas collection and treatment system will eliminate the stored H2S and any H2S generated before the site dries out.”

Fact:  The DEP Fact Sheet after installation of the impermeable cap at Fenimore Landfill proved elimination of H2S was feasible:  “The impermeable cap continues to contain the H2S gas, virtually eliminating any fugitive emissions.”

Fact:  As a planner and engineer, Mr. Marturano has no health credential or experience to make that statement.

Fact:  The Department of Health has issued a Hydrogen Sulfide Fact Sheet that states as follows:  “Exposure to low concentrations within the range of 30 ppb may cause eye, nose, or throat irritation, headaches and nausea.  It may also cause difficulty breathing for some individuals with respiratory problems, such as asthmatics.”

Fact:  California and New Jersey regulations set 30 ppb of H2S as the limit intended to protect against physiological symptoms like headache and nausea.

Fact:  the Superior Court’s Sept. 30, 2019 decision: “The hundreds of complaints reveal the direct and adverse impact that H2S emissions have had … these detailed and specific reports do not demonstrate mere inconvenience nor minor annoyance.  Rather, they identify and describe adverse health effects that have been suffered and will continue to be suffered by residents, visitors and inspectors at the site.”

Newspeak here included the omission of fundamental historical facts in the letter, such as:  NJSEA used eminent domain to take the landfill in 2016; that the height limitation was to be 60 feet and that recreational fields would be built atop the landfill; that the landfill’s historical uses were not the cause of the H2S emissions but rather dumping since 2010 by NJSEA of sheetrock and gypsum wallboard; that the site was mismanaged by NJSEA, with unknown quantities of dumped sheetrock and liquid sewerage sludge; that the Town had to install air monitoring stations and publicize the elevated reads of H2S before NJSEA or DEP took any action to address H2S emissions.

Fact:  DEP inspector’s report of November 2018:   “Keegan supervisors told me that they don’t keep track of how much wall board is brought in.”

Fact:  The DEP’s July 3, 2018 videotape showing the actual dumping of liquid sewerage sludge at Keegan Landfill, and the entry of inaccurate information in landfill manifests.

Fact:  The Superior Court’s statement, “NJSEA does not appear to have sufficient managerial control about what waste is accepted by the landfill.”

Fact:  March 28, 2014 DEP Fact Sheet for Fenimore Landfill:  “A contract for a cap is to be awarded in June 2014, actual construction to start in September 2014, liner installation will be completed by end of year,” with landscaping completed the following spring.  “Once the liner is installed, the gas system will collect all the H2S. The treatment system will then treat the gas and eliminate the odor.”  By the end of 2014, Fenimore was lined with an impermeable cap and H2S was eliminated.

The NJSEA cannot define reality.  2 + 2 does not equal 5.  Verifiable truth defines reality.  The NJSEA broke Keegan for its financial gain without regard to the harms it would inflict on the community of Kearny – the NJSEA sacrificed our health and the environment of Kearny for monetary gain.

We will continue to hold you accountable to the truth.  I’m confident that the day will come that Keegan will be fixed with an impermeable cap.  Our community is not stopping until H2S is eliminated.  But even after that day comes, you – NJSEA Commissioners, NJSEA directors and division heads – you will always be tainted by the grave harms caused or enabled by your actions, by your inactions, and by your Orwellian distortions and untruths.

(Photos by Barbara B. Goldberg) 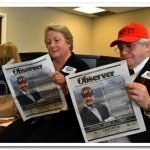 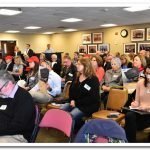 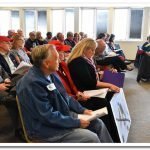 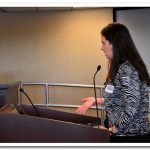 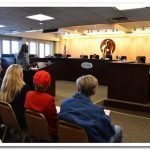 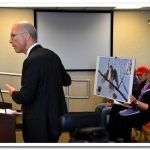 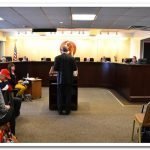 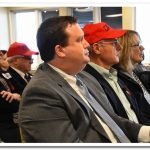 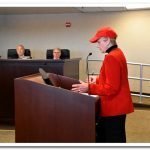 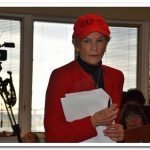 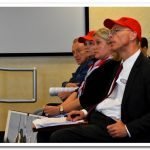 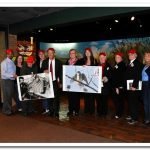